UMA, the acronym for Universal Market Access, refers to a program hosted on the Ethereum blockchain, and gives users the ability to generate synthetic assets that can mimic almost any asset’s value.

On the other hand, the term UMA still refers to the native coin of the protocol. UMA is structured with the ERC-20 token attributes. Notably, the application also provides a link to non-Ethereum crypto networks.

This capability provides a link to assets that could otherwise be inaccessible on the blockchain. The UMA program offers financial contracts on the Ethereum chain. It seeks to uphold its mission of universal access by providing an open-source financial derivatives trading platform. 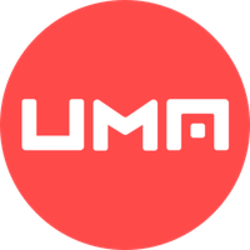 The UMA coin made its debut in April 2020 through an Initial Coin Offering on Uniswap. Through the ICO, UMA sold 2 million tokens at an approximate value of $0.25. The total number of all coins was 100.13 million.

UMA then reserved the remaining coins for the project pioneers, network programmers, and the rest for expected future sales.

Currently, the approximate number of circulating coins is 55 million. Since its debut, the coin’s value shot up in the next three months to around $1.5.

The status quo was changed in late July 2020 when UMA announced its yield dollar’ lending and borrowing service. The price shot up to $5.

The price was on a rising trajectory for a better part of August 2020 and rose to an impressive estimate of $28. However, the price slowly dropped in 2020. Above chart shows the current UMA price in EUR, USD and GBP.

UMA is the utility token of the protocol. It serves the critical role of managing the system.

The UMA tokens provide a base for the synthetic ones whose value rises or falls depending on the fluctuations of the price of the asset they are mimicking.

The generation of synthetic coins requires an ERC-20 based collateral like DAI. Though the collateral level can change, it should not go below 120% of the value of the new coins generated.

For instance, to make $200 of synthetic BTC coins, you would need crypto collateral valued at $240.

However, it’s important to note these new tokens expire when the contract that generated them expires. They are bought or sold like any other ERC-20 token before their term lapses.

Moreover, ETHBTC was the sample for the pilot experiment of their priceless synthetic model. In this new design, UMA excludes oracles in its operations. This exclusion means that the prices of contracts entered don’t have to be made public on the blockchain.

UMA is against the conventional and perpetual reliance of oracles in ensuring that collaterals in smart contracts remain valuable enough to secure the synthetic asset generated.

The priceless design excludes the need for a price tracker on the blockchain. The approach is considered centralized and making the platform prone to failure.

Rather than relying on oracles, the UMA network allows an user to liquidate any collateral whose value has gone below the desired level. The source for this information is the sponsors of private off-chain data.

If no user liquidates the collateral, the system assumes that the contract is duly collateralized. The platform seeks the service of the oracle in the event of a disputed liquidation.

The user initiating the smart contract is the facility owner. Another party, say X, could consider the smart contract feasible and locks in the needed collateral to create synthetic coins. The second party, X, is known as the sponsor.

The DVM is the oracle whose services the users seek when the collateral value used in a contract is in dispute. UMA uses the “priceless” approach to managing collaterals in smart contracts.

Thus, a motivation scheme is in place to encourage token holders to go out of their way and confirm whether the collateral value submitted to a smart contract remains above a given threshold.

The collaterals data is available on Etherscan. If the collateral falls below the desired level, then the token holder calls for a liquidation.

If the facility owner finds fault with the “call,” he enters a conflict resolution process. This arbitration stage requires the intervention of the DVM. However, the latter has to lock some UMA tokens to qualify as a valid disputer.

UMA Token holders possess some level of control on the UMA platform. When the platform seeks the Data Verification Mechanism services, the holders vote to determine an asset’s price. UMA requests their vote through a request on the chain.

Moreover, the token holders vote before an imminent system upgrade that will affect the UMA program. They can vote to discard dormant smart contracts or even freeze contracts in the wake of unprecedented situations.

The token holders get rewards for their active engagement during voting. However, the magnitude of assets the token holder has on UMA determines the sharing ratio.

Like many other ERC-20 DeFi tokens, any crypto wallet compatible with the Ethereum blockchain can store the UMA token.

One of the most straightforward options for the layman who knows little about the Ethereum blockchain is MetaMask. The user first downloads MetaMask as a browser extension. It’s available for major browsers like Mozilla Firefox and Google Chrome.

Ledger Nano X is the best choice if a hardware wallet is all you want. It offers offline crypto storage and is not prone to hacking.

Investors should keep in mind the volatility of all cryptocurrencies. Therefore, they should do a thorough risk evaluation before deciding on the best investment technique in cryptocurrency.

The uniqueness of UMA as a Decentralized Finance project gives it a competitive edge. The platform has a fully-fledged synthetic market and a smart contracts capability, all on a decentralized blockchain.

Unfortunately for them, they only offered 2% of their entire supply of 100 million coins to the investors. Investors may feel outnumbered by the pioneers and developers in terms of their voting power on the platform. This situation has the domino effect of discouraging some investors.

However, with approximately 50% of the share, the founders have vowed to suspend voting on the platform until 2021.