What are smart contracts?

Smart contracts are pieces of software written on a blockchain. You can compare it to a digital agreement in which two or more parties specify agreements with conditions. All parties can view the contract, but it is not possible to change the contract (afterwards). As a result, the parties do not necessarily have to trust each other, as they can rely on the contract and the underlying blockchain technology. Smart contracts ensure that an intermediary (think of a platform such as Airbnb, broker or notary) is side-lined.

In simple term, you could imagine it this way: you need a contract (a loan, a driver’s license, a purchase document for a house) and you don’t want to use an intermediary (a lawyer or a real estate agent) for this. In that case, you could use a smart contract to establish all the conditions.

A simple example of a smart contract 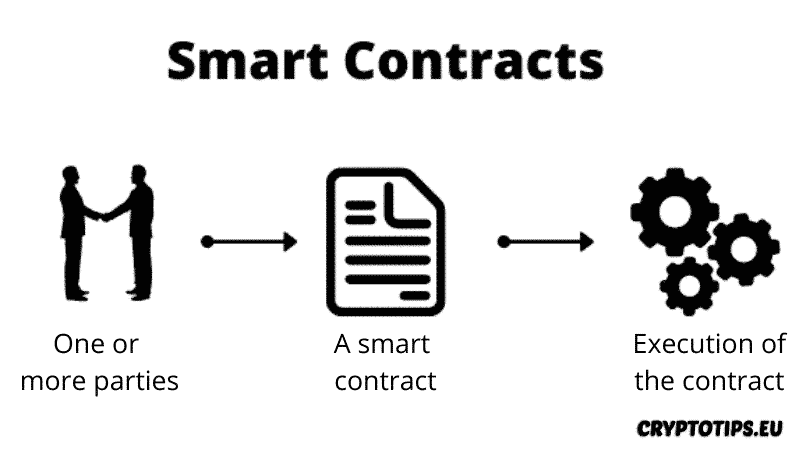 Party A wants to buy a house from party B. If party A transfers the purchase price to party B, the house is automatically transferred to the name of party A. The transfer is fixed forever on the blockchain. There is more to buying a house, but this gives you an idea of how a contract works with conditions.

An example of an extended smart contract

Suppose you want to rent an apartment in Barcelona for a certain time to enjoy the sun, sea, and beach. You agree to pay in cryptocurrency. A smart contract will be drawn up with the conditions agreed upon. Both parties can view and verify the smart contract (but not change it!). If you transfer the money, the contract ensures that you receive a digital key that gives access to the apartment. If you do not pay or pay too late, you will not receive a key. In case of late payment, the amount will automatically be transferred back to your account.

If you have paid and received the key, it will be confirmed that you may enter the apartment during the agreed period. Afterwards, both parties will be informed that the contract has expired. In this contract, there are several conditions and outcomes.

The history of smart contracts

The technology behind smart contracts has been around since 1997 when it was described by Nick Szabo, a computer programmer who later became known for working on the development of Bitcoin with the man behind the pseudonym Satoshi Nakamoto. Since then, some people have claimed that Nick Szabo himself is the real Satoshi Nakamoto, but Nick has consistently denied it.

He wanted to develop an electronic ledger to store contracts and give everyone connected to that contract access to the ledger. After blockchain and Bitcoin were accepted by the global financial community as new technologies in recent years, Nick’s technology could be applied, and smart contracts were also increasingly being built-in.

One of the best-known supporters of smart contracts is Vitalik Buterin, the founder of Ethereum, who claims that the technology can be seamlessly integrated into any blockchain code.

The use of a smart contract offers many advantages for all parties. For example, everyone has the certainty that the conditions will be fulfilled. Besides, it is impossible to change the contract once it is on the blockchain. In this way, the parties do not have to trust each other. When buying a house, you are 100% assured that the house will be transferred to your name after payment of the purchase price.

Besides trust, you don’t need an expensive notary to record everything. This ensures that intermediaries are no longer needed. So, it is much cheaper to use.

The last advantage is that the smart agreement is always on the blockchain. So, you can always conjure up the contract and you don’t have to worry about backups or safes.

Lawyers argue, however, that this form of contract does not allow for unforeseen factors such as a natural disaster, a worldwide disease, an intervention by a government or mayor. According to them, Blockchain cannot yet take into account the factors in which humans still play a role.

Another disadvantage may be that the contracts are not adaptable. Suppose you want to change the conditions of a contract, then that is not possible. You have to develop a completely new contract. For example, in the case of this rental agreement, someone may want to stay longer, and the price may have to be increased and access extended. This can only be done by drawing up a new contract, in which a new payment has to be made and a new key has to be issued.

Furthermore, the software is written by people who can also make mistakes. If an error is not noticed, it can have major consequences.

Which platforms use smart contracts?

Another platform that uses smart contracts is NEO. This is also called the Chinese Ethereum.