Who is Justin Sun? 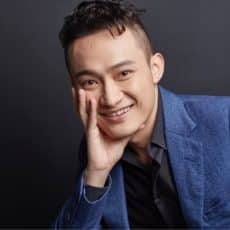 Justin Sun is a young Chinese tech entrepreneur born in 1990. He became wealthy in 2017 when, at the opening of his cryptocurrency platform and the associated TRON (TRX) coin, he raised 63 million euros in China. In 2019, he made it to the world press by bidding 4 million euros on eBay for a charity lunch with investor Warren Buffett and cancelling it three days before the event.

He is also the CEO of the company BitTorrent, which he acquired in 2019, and owns Poloniex (a relatively well-known cryptocurrency exchange).

Justin was asked at the age of 26 by Jack Ma, the CEO of Alibaba, to study at his Hupan University. Justin took lessons from Jack Ma himself and the two have since become good friends. Rumours are that when Justin Sun gets into trouble with the Chinese government, Jack Ma uses his influence to get his young protegé out of trouble. Justin already repaid his mentor well by donating about 1.2 million euros to Hupan University in April 2019.

Before Justin came to the attention with crypto, he already had a media history.

In 2011 he was featured on the cover of the Chinese magazine Yazhou Zhoukan, a competitor of Asia Week. In 2014 he was mentioned as a Global Youth Leader at the annual Davos forum in Switzerland and in 2015 the Chinese television channel CNTV named him the most noteworthy new entrepreneur. Between 2015 and 2017 he was also listed as Forbes Asia under 30, a list of important global persons in that age category.

Justin is often negative in the media

As a true master marketer, Sun always draws attention to himself and his companies with everything he does. He promised in December 2019 to donate $1 million to Greta Thunberg’s organization because he shares her passion against global warming. This message was received with great contempt by his two million followers on Twitter.

The fact is that cryptocurrency requires large amounts of energy to be mined. Because cheap energy is available in China, about 50% of all miners are in this country. It is assumed that cryptocurrency contributes to air pollution in China. In 2019, he was also accused of fake Twitter followers and that he had not yet fully paid for the BitTorrent takeover.

Justin Sun gained international fame when, in the summer of 2019, he paid a sloppy 4 million euros for a lunch with Warren Buffett, the legendary investor and CEO of Berkshire Hathaway. Justin claimed he wanted to be the first person to make Warren invest in crypto.

However, three days before the famous lunch was due to take place, Justin himself cancelled the whole thing. According to him, he was suffering from kidney stones. Critics of the young entrepreneur claimed that he had just used the whole thing for marketing. Since the story made the world news, it seems to have been a success.

Justin is also coming more and more into the sights of the Chinese government. The communist government in Beijing, which used to be a big fan of cryptocurrency that provided many jobs, has turned around for two reasons.

Crypto mining relies on cheap energy, and in China, this means using polluting coal mines, which still account for most of China’s energy supply. To lower its carbon footprint, the Beijing government has since imposed strict rules on the entire crypto industry.

Secondly, there is the anonymity that crypto brings with it. Because there is no central bank involved, crypto has been linked to criminal activities in several cases. After all, payments between two crypto wallets do not go from name to name, but rather from wallet to wallet. Often a registration with a name is not even necessary, which implies anonymity.

In China, which has had several self-made billionaires since its economic boom of this century, this means that wealthy people transferred their money to tax havens by using crypto. Therefore, especially since President Xi Jinping took office, the communist government has been hunting down billionaires to avoid taxes.

After his cancelled lunch with Warren Buffet, rumours were that Justin Sun was one of those tax evaders, but the Tron CEO has always denied this.

A Chinese company in America with which Justin has good ties is Raybo Technology. Last year the company tried to obtain patents for Justin from the US Patent Office to bind the name Tron to the young Chinese entrepreneur forever.

However, when Disney CEO Bob Iger heard about this, he called in an army of lawyers and shut the whole thing down.

After all, the 1982 Tron and 2010 Tron Legacy movies were brand names specific to Disney, and Iger didn’t want the Tron brand name simply to be adopted by a youngster from China.

Both companies have meanwhile called in lawyers to plead the case. Will certainly be prosecuted.